So you've got an IRIG-B clock or clocks and are ready to set up your timing network. But how do you best connect all your cabinets and IEDs to it? Directly, or is there often a better way?

A great option to add resilience is the ITR. It has four key functions:

Regenerates signals that may be degraded after travelling a long cable

Converts Media – Accepting a Copper or Fibre input, the ITR can convert the signals to: 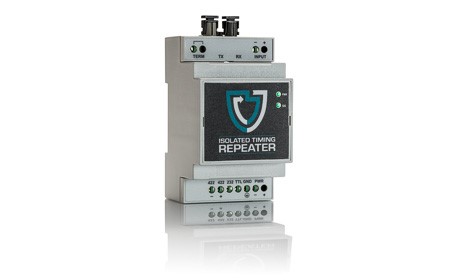 Click the orange button at bottom right to talk to us now, or read on for details:

When a fault occurs and breakers trip in a substation, the electrical interference this causes can really mess with your signals. The problem is, that's exactly the moment you need your timing network to be up and running so you have an accurate sequence of events. The solution is isolation.

So the first key feature of the ITR is to break up a timing network and provide isolation between different points in the network.  There are two ways the ITR can do this:

The first, and probably the best, is by creating a fibre IRIG-B timing bus and using the ITR as a media converter.

In figure 2, a single fibre output is taken from the clock and passed into the first ITR.  The ITR then repeats this fibre signal, which can be passed onto the next cabinet, where it is repeated and passed down the chain.

The ITR at the top of the cabinet converts this signal into DC IRIG-B, AM IRIG-B or almost any other signal you require.

This gives perfect electrical isolation between the cabinets, protecting against earth fault conditions or cabinet related electrical faults.  With fibre being used outside of the cabinets, any radiated noise on the IRIG-B signals is eliminated, reducing the chance of timing errors due to corrupt IRIG-B signals.

The final benefit is that the master clock can be much simpler, with only a few outputs required to sync an entire installation.  This reduces the master clock cost and removes multiple long cable runs from the clock, making for a tidy cable tray. 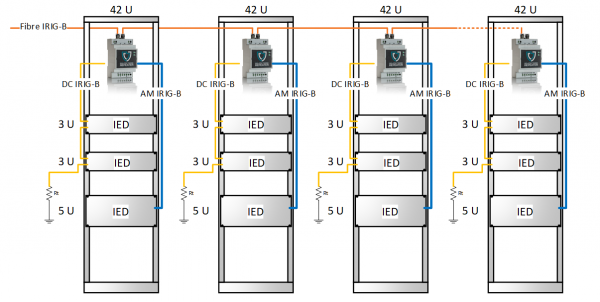 Figure 2 – ITR Installation example where a fibre bus is used

The second way to create a IRIG-B timing bus is to use the same setup as shown in figure 2, but instead of fibre, use shielded twisted pair (STP) copper cabling.  STP cabling is cheaper than fibre, and still has good shielding properties to protect against radiated noise in the substation.

Having only a 2 mA burden on a DC IRIG-B clock output, over fifty ITRs can be run from just one clock output, again meaning a small clock can be used to synchronise a large installation.

For a DCLS signal being transmitted over a long distance the cable capacitance becomes important. In figure 3, the effects of a high cable capacitance can be seen with the rising and falling edges of the IRIG-B signal starting to become rounded. This rounding not only affects the signal accuracy, but may also cause some IEDs to falsely trip or reject the signal completely.

The cable capacitance is a limiting factor for the overall distance you can transmit the signal before needing regeneration. For RG58 cabling it’s recommended you limit cable runs to less than 50 m.  For Shielded Twisted Pair (STP) this distance increases to 100 m.

If you need to transmit your signals further you can use an ITR inline to regenerate the signals, recreating/ re squaring the green dotted trace shown in the image.  This effectively doubles the distance that you can transmit the signal.

When designing a timing network, the number of Intelligent Electronic Devices (IEDs) that need to be supported might overload the drive power of the master clocks output.  This leaves you with two options.

2) Install ITRs to boost the signals from a single output.

With only a 2 mA burden on a clocks IRIG-B output, fifty or more ITRs can be driven from a single clock DC output.  With each ITR packing a 150 mA punch on their DC IRIG-B outputs, you can synchronise hundreds of IEDs from just one clock output.

Not only does this reduce the size of the clock, it also reduces cabling throughout the installation; the only cable is the one from the clock to the chain of ITRs.  Each ITR is then fitted to the top of a panel with the DC or AM IRIG-B signals being contained to a single cabinet.  Neat!

One of the most common applications of the ITR is to act as a media converter between the different types of signals, saving the hassle of finding master clock that supports them all.

The most common example is as per figure 2, where a fibre signal is transmitted between cabinets or between two different sites.  The ITR can be used at both ends to convert from copper to fibre, then fibre back to copper at the secondary location.  In the example where there are two different sites this removes the need to install a separate GPS clock in each building.

The next most common example is where there are multiple IEDs in a single cabinet, each requiring a different timing signal i.e. DC IRIG-B, AM IRIG-B, RS422 etc.  The ITR can be placed at the top of a cabinet taking in a single DC IRIG-B input.  The ITR will then repeat this signal into the following formats:

Having all the signals available from a single box means that a) your master clock does not need to support these signals and b) if you require multiple signals in a single cabinet, you no longer need separate cables from the master clock, but just for one or two devices.

To see specs or get a quote, see the ITR page here

If you want to learn more about the ITR or find out how it can be used in your installations, please contact us 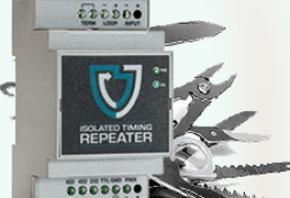