With growing realization of the effects of climate change, interest in renewable energy sources is skyrocketing. That comes with challenges. One of those is storage -  you need to be able to supply power when needed, not just when it’s sunny or windy. Lately there's been a big push towards solar panels (photovoltaic cells) and battery development but recently I found several generation plants which harness the suns power in a unique way.

It’s called Concentrated Solar Power (CSP). These plants store energy in a heated liquid which is stored in insulated chambers and converted to steam when power is required. The heating of the liquid is ingenious - a field of mirrors on the ground reflect sunlight to the top of the tower where cold liquid is pumped to be heated. To keep things hot, the mirrors are motorized so they can track the sun and keep the light concentrated on the tower. 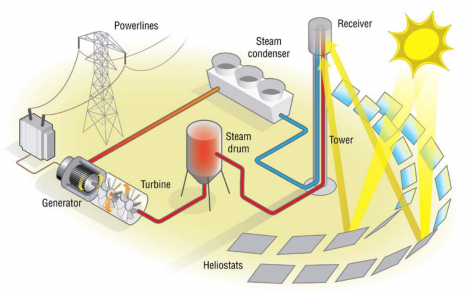 Image Credit: US Department of Energy

The Crescent Dunes plant in Nevada is a fantastic example of CSP. Crescent Dunes was connected to the Nevada grid in September 2015 and generates 110MW (enough to power 75,000 homes) by using over 10,000 mirrors spread across 1600 acres. 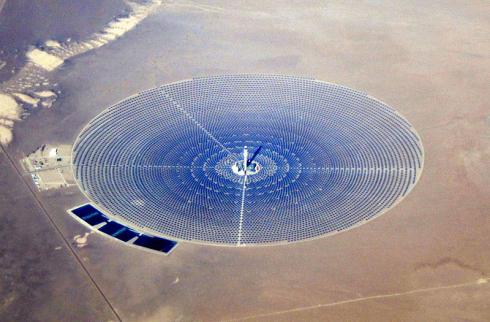 Amazingly, it can provide its maximum output for 10 hours after the sun has gone down. To achieve this awesome feat, Crescent Dunes uses 70 million pounds of molten salt which sits at a “Cold” temperature of 288 oC (550oF), and is heated by the sun to 566OC (1050OF). Molten salt has a high heat retention, which means it can hold onto the energy for longer than if they were to use, say, water.

Because Crescent Dunes relies on the sun to heat the salt to its “hot” temperature, it doesn’t start generating till 10am in the morning, and reaches full load by midday. However it continues to generate maximum power until 10 o’clock at night – well after sundown and so can supply power at peak time as everyone gets home after work. This instantly gives it an advantage over “standard” solar plants (ie. photovoltaic solar panels) which only generate energy while the sun is shining.

While this generation technique is amazing, the site still has an impact on the local wildlife. Birds which fly through the reflection path of the mirror will get burnt, and often so seriously they die. Workers call them "streamers".

There was a particular incident during initial testing (Sept 2015) when the mirrors were placed on standby. They weren't focused on the tower, but a point in the air just above the towe which superheated and became a killzone. In that hour of standby over 100 birds were killed as they flew through the focus point. Quickly the mirrors were re-focused so the focal point was distributed across the site, which seems to have dealt with the problem. Even so the PR effects are hard to ignore.

The largest CSP plant currently in operation is in Ivanpah California, the Anakin Skywalker of the CSP. It uses three towers spread across 3,500 acres to generate 377MW - enough to power 140,000 homes. This plant was the Chosen One, given a large grant by the U.S. Energy Department and promised lots of good things. Turns out it’s been plagued with problems since the word go. 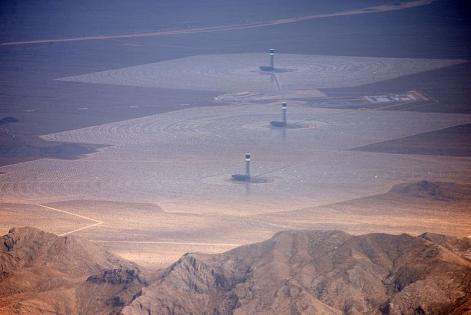 Ivanpah from the air
By Craig Butz (Own work) [CC BY-SA 4.0 (http://creativecommons.org/licenses/by-sa/4.0)], via Wikimedia Commons

Initially Ivanpah struggled to meet its contractual demand and was bailed out by the government. They have also had multiple engineering problems such as a fire at the top of a generation tower.

But the worst thing about this site is its fossil fuel consumption.

Hold on…. What, wasn’t the point of this to reduce fossil fuel consumption?

Why? Because like Anakin it has turned to the dark side. Gas is used to keep the system primed overnight, heating up water in the morning to start the system faster. They also use gas to contribute to heating when there is major cloud cover. And, of course, they have no real energy storage system. Water is their heat transfer medium which is directly converted to steam because it wont hold the heat. Without this energy storage they can only operate during sunlight hours. That's why they use natural gas to heat and prime the system so it's ready to go as soon as the sun is shining!

But the numbers work in their favour at the moment. While burning gas at night, they are not using the gas to directly generate electricity. This means they can claim minimal gas is used for generation and come out looking like a good jedi. Approx. 5% of their electricity was generated using gas in 2015.

Maybe one day they can complete the Darth Vader/Anakin Skywalker reference and restore balance to the force (aka the ecosystem) by adopting a system closer to what Crescent Dunes operate.

So Concentrated Solar Power with thermal storage is a novel and effective method of energy storage. However, the future is unclear. To build a CSP plant is more expensive than natural gas plants. The bulk of a CSP plant consists of steel and mirrors, which have been around long enough that they are already as cheap as they'll get, whereas photovoltaic panels are becoming easier and cheaper to make as more time and research is put into them. So while CSP is at its cheapest to build already, photovoltaics are destined to get cheaper. It may be that they eventually pass CSP as the best large scale solar option, especially when combined with improving battery tech.

Both sides of the force: 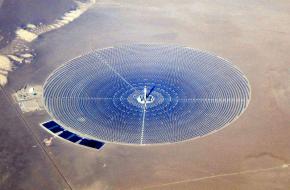