How to Use PTP with non PTP Equipment

How to Use PTP with non PTP Equipment

We’ve talked about how IEEE 1588v2 (Precision Time Protocol or PTP) moves timing onto your Ethernet network and removes the need for dedicated cable runs. It’s super accurate and supports the latest redundant systems, so it seems like the natural choice to time sync new substation builds.  It’s also a great way to step your new installation into the future and ensure that it will keep timing accuracy for the life of the substation.

But what if you use equipment that doesn’t support PTP?  How about a site upgrade where not all the Intelligent Electronic Devices (IEDs) are replaced?  Can PTP still be used?

The simple answer is yes. Depending on the size of installation and the number of IEDs that require legacy time sync signals, the simplest way to support these devices is by using converters – what we call PTP to legacy signal converters. The idea behind these converters is that they interface directly to a PTP enabled network and act as a PTP slave. Once synchronised to the Grand Master (GM), these converters will translate the incoming PTP signals to IRIG-B, DCF77, HV pulse and LV pulses, to an accuracy of < 1 µs*.

Some examples of these converters (ones we make) include;

*Accuracy is design dependent.  If you need help with your design please contact us

How about an example implementation?

In North America a large TSO was upgrading a brownfield (existing) installation.  As part of the upgrade they were implementing a redundant PTP network.  They went with two PTP grandmaster clocks, and slaved all the PTP compliant IEDs to the fibre network ring.

As this was a brownfield upgrade not all the existing IEDs were being replaced, meaning many lacked PTP support.  This presented a dilemma, as the end user only wanted a single timing network from the master clocks.

Rather than running an IRIG-B timing network alongside the Ethernet network, they opted to use PTP translators to support the older IEDs in each cabinet.  The PTP translators were placed at the top of the cabinets requiring IRIG-B or pulse signals.  The IEDs within these cabinets were multi dropped from the outputs of the translator, providing an accurate IRIG-B/ pulse time source.

This meant the user could run a single timing network around the whole installation.  With one PTP translator per cabinet, and with a direct connection to the fibre network, they kept electrical isolation between the cabinets.  Keeping the IRIG-B signals confined to a single cabinet meant the cable runs were minimized, and the common problems of propagation delay errors, signal rounding and induced noise were removed. 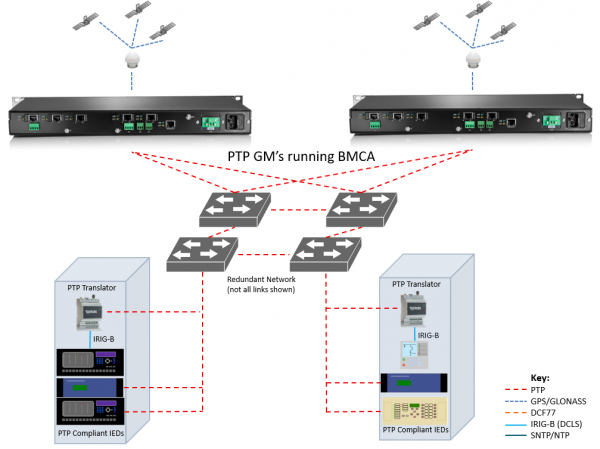 What about in a PRP network? Will I need REDBOX’s?

One great thing about PTP is that it can be run across a redundant network structure like a PRP network.  By implementing dual PTP GM’s running the PRP protocol and connecting these into a PRP network, you gain redundancy not only for a network failure but also a GPS clock failure.  This ensures that your timing network stays operational even when you have several failures at once - i.e. a switch and a clock fail simultaneously.

Nowadays, as the implementation of PRP increases, the support of IEDs is growing.  In many cases IEDs on the market either support PRP natively or are interfaced to the network as a Single Attached Node (SAN), or via a Redundancy Box (REDBOX)*2.

*2Not familiar with these terms?  Check out our blog on PRP Basics.

For time sync, IEDs that support PRP will normally support PTP.  This is great as it means that you can connect these directly to a PRP/PTP network – gaining accurate time sync with built in redundancy!  For the IEDs that do not support PRP but still support PTP, these can be connected to the network via a REDBOX or as a SAN.  So you may lose some of the benefits of PRP, but you can still tap into the PTP network.

The final case is where the IED doesn’t support either PTP or PRP.  To solve this you could follow the first example and combine a PTP translator with a REDBOX, but more devices means more points of failure and increased costs.  Not an ideal solution! Alternatively you could run a separate IRIG-B fibre network from the clock to the different IEDs that require this, using fibre to galvanic converters at the cabinet.  This results in double the timing networks, more equipment, and leaves the IRIG network susceptible to failure should the clock stop operating.

Finally you could use a PRP enabled PTP translator connected directly to your PRP network.  This would reduce the amount of equipment required, gain access to a PRP network, and save you from having to run a separate cable from the clock to the IEDs which require IRIG-B.

Now you could argue that in this design that the PRPTP translator is a single point of failure within the installation.  I agree, but note that a single PRPTP translator failure will limit the outage to a single cabinet rather than taking down the entire timing network like the IRIG-B example.  So not a bad compromise!

This solution was adopted by a TSO in the UK.  Within their installation they created a PRP network, with PTP being the main source of time sync.  All the IEDs which could be directly connected to this PRP/PTP network were connected as Double Attached Nodes (DANs).  All the IEDs that could not support this gained their time sync via a PRPTP translator.

This solution helped to reduce the costs of the installation by removing the need for standalone REDBOXs.  This removed a point of failure and reduced the engineering design and deployment time.  By utilizing a fibre network and confining the IRIG-B signals to a single cabinet, they also maintained electrical isolation between cabinets.  An example of this implementation is shown in Figure 2. 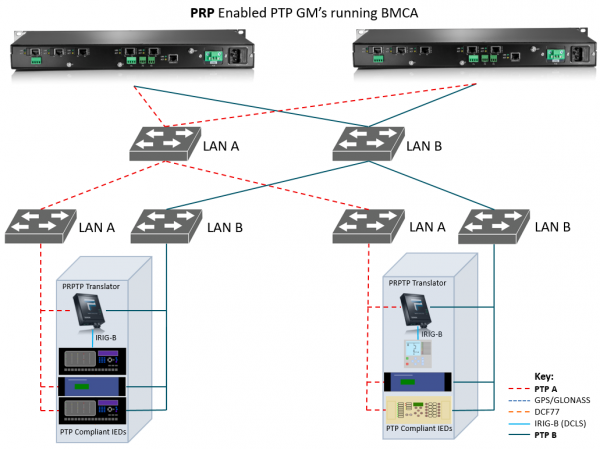 To sum up, PTP is an emerging technology which is eventually going to replace the standard IRIG-B installations.  Perhaps next time you are doing a network upgrade on a brownfield site, you may want to consider taking a step into the world of PTP rather than maintaining a separate IRIG-B network.

Want to know more about the benefits of PTP?  Check out our “What’s so great about PTP?” blog. 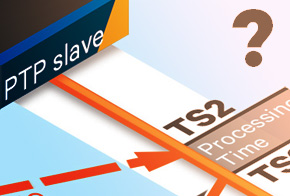