GNSS timing – how it can go wrong, and why it's still the best

With the needs of network design becoming more stringent in many industries, the need for accurate timing is greater than ever.

When there are many IEDs (Intelligent Electronic Devices) on a network with their own clocks this becomes difficult to coordinate, so central time servers become useful. Proper precision timing on a network can maintain a very accurate source of time to keep all IEDs in sync, often within 100ns.

Uses for accurate time are many, especially in scenarios where digital instructions need to be executed at the right time or data is being transferred at high rates. Installations also regularly include event logging as a key feature. Getting the exact time an event occurred is important in many industries where faults need to be traced. The speed of electricity makes this especially important for the power sector, which also uses precise timing for phase measurement, multi-rate billing accuracy, locating faults on transmission lines, relay testing and more. In some cases a network will need to be synced across many miles. In such cases, GNSS based timing is often the only cost effective option.

What is GNSS timing, and why use it?

We use GNSS satellites because they provide an accurate and synchronized source of time across large distances, without the need for expensive atomic clock hardware. GNSS is a method of using satellites to determine the position and local time of a ground unit. Types of GNSS include GPS, GLONASS, BeiDou and Galileo. 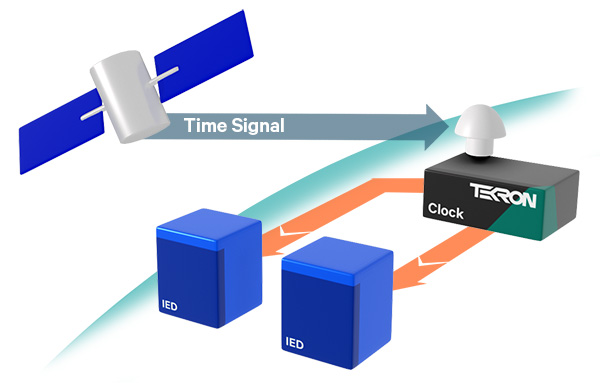 The satellites contain extremely accurate, globally synchronized clocks, synced with each other and their ground stations. They each send two carrier waves to earth, L1 and L2, encoded with the exact orbital position of the satellite at that moment and a time stamp. The signals are received and sent to a processing unit in each device – in this case the time server. When at least 4 satellites are visible to the GNSS receiver, trilateration can be used to get an accurate location and local time for the receiver. That time is then forwarded through the network using whatever protocols the user has set up. Because time servers do not move in most installations, location is only needed at first to figure out exactly how much offset to apply to future time signals. After this the receiving unit can easily calculate it’s time from just one signal. If the time server is a mobile unit like those in aircraft or vehicles, multiple satellite connections are always needed to update location and correct signal time delays to the satellites. Tekron clocks support both fixed and mobile implementations.

How it can go wrong - Spoofing and Jamming

Jamming is the term used to describe deliberate and malicious noise interference with the GNSS signal before it is received at the antenna. A jamming device will typically flood the GNSS frequencies with radio noise which drowns out the relatively quiet GNSS signal. This means that the time signal is lost from the time server.

“Spoofing” is when a malicious signal is sent to the receiver with deliberately incorrect time and location information. This has been used to send ships off course, but can also be used to make timing systems incorrect and disrupt infrastructure.

Fortunately there are ways to stop these attacks. The first is the use of a backup oscillator which lets the clock to go into holdover. Holdover is when the server has lost its GNSS signal and is maintaining time from an internal source. The type of oscillator and the application will determine how long holdover can last. The most common types are OCXO, VCTCXO/TCXO and Rubidium, which can maintain accuracy for between hours and days depending on the options chosen. To deal with spoofing attacks, multiple receivers and antennae can be used to compare signals and rule out incorrect sources.

See here for more about how Tekron deals with spoofing and jamming attacks.

Sometimes the satellite signal is simply lost, and there are many possible causes.

One potential cause may be signal interference. This is slightly different from GNSS spoofing because it’s not deliberate. Interference can occur at different stages in the process - before the signal has reached the antenna, after it has reached the antenna and is on its way to being processed, and after it has been processed. There are many causes for these interferences but the most common are nearby wireless devices like cell phones. Normally this interference is so minor that it does not affect timing, but when accuracy is key to the application it can have an impact.

Cable interference is another source of signal loss which often happens after the GNSS signal has been processed and is on its way to the IEDs. Damage to the cable can prevent timing information from reaching the IEDs. To protect against this we recommend using high-quality copper or coaxial cabling and running a Parallel redundancy protocol (PRP) setup to provide redundancy. The other source of signal loss can come from wireless signals affecting the cable itself. Copper cabling is susceptible to outside interference from wireless devices and electromagnetic noise. In a substation under fault conditions this can cause time signals to be lost at exactly the moments they are most needed. Options are to use Fiber, Coaxial or Shielded copper cabling, which are designed to prevent outside influence on the cable.

One of the most common issues we come across is poor antenna placement.

There are several things you can do to get the best signal. First, make sure the antenna can see the sky. This may seem obvious, but some installations can make it difficult.

Secondly, keep it away from metallic surfaces. These can bounce signals – introducing distance error or changing the shape of the perceived antenna, warping the signal.

Distance between antennas is another contributing factor. It’s important that antennas are far enough apart not to interfere with each other via shadowing and near-field interaction. The minimum recommended distance between each antenna is approximately 1m. We recommend antennas are as isolated as possible to also minimize the effect of events such as lightning strikes.

To see the latest best practice for the next step: how a clock is connected to IEDs in a substation, click here ►